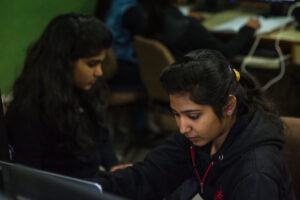 In the initial phase of this lab, a brief introduction to Linux operating system would be given including the details of its kernel and shells. Then further shell commands would be introduced with their examples and usage inefficient working of system resources.

After introducing a huge number of commands shell scripting gets started. Scripts include programs like: write a Shell script that deletes all lines containing a specified word in one or more files supplied as arguments to it, program that illustrates how to execute two commands concurrently with a command pipe, Implementation of CPU Scheduling Algorithms. a) Round Robin b) SJF c) FCFS d) Priority and also a client and server programs in C for connection-oriented communication between server and client process using Internet domain socket to perform the following: Client process sends a message to the server process. The server receives the message, reverses it and sends it back to the client. The client will then display the message to the standard output device.

Finally conducting so many scripts now the student will able to implement some standard Linux utilities using system calls. The main aim of this lab is to provide the ability to students to understand the LINUX environment and should be able to perform the file management and multiple tasks using shell scripts in Linux environment.

We all know that as a person, in general, whenever thinks of operating system from childhood knows about the Windows and now a days Android but actually LINUX acts as the heart of operating system as it’s also an Open Source Software whose Kernel detailed source code is freely available and skilled programmers can use it as a platform to study and explore new things and also one can install freely from the internet. So, this was one of the important reason that our focus lies in introducing LINUX in this particular lab.

The major outcome of this lab would be the student studying operating system as a theoretical subject can practically implement its concept to better understand the working of important concepts of the Operating system.