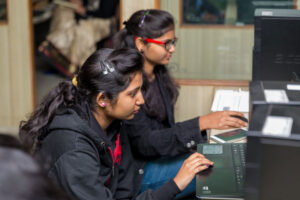 In this era of globalization, computers are what made us aim towards a DIGITAL and SKILLFUL INDIA. But data is of no use until exploited by the brilliant thinkers. This was made more efficient by the Introduction of DATA STRUCTURES, which a way of collecting and organizing data in such a way that we can perform operations on these data in an effective way. Data Structures is about rendering data elements in terms of some relationship, for better organization and storage.

After gathering enough information about Fundamentals of Computers it was high time to enter the pool with Data Structures and so we started with the basic types: Primitive(built-in) and Abstract(user-defined) where the built-in consists of Integer, Float, Boolean, Char etc. and the user-defined consists of Linked List, Tree, Graph, Stack, Queue etc.

The Linked List forms the backbone of the entire data structures distinguished in LINEAR LISTS AND NON-LINEAR LISTS. Further stacks and queues come with linear lists and trees and graphs under non-linear lists. Linked lists have always been of a higher significance because these are dynamic, which can grow and be pruned, allocating and deallocating memory while the program is running. Insertion and deletion node operations are easily implemented along with Dynamic data structures such as stacks and queues.

With one step higher always, we are now introduced to the ALGORITHMS, without which Data Structures can’t exist. An algorithm is a finite set of instructions or logic, written in order, to accomplish a certain predefined task. The algorithm is not the complete code or program, it is just the core logic of a problem, which can be expressed either as an informal high-level description as pseudo code or using a flowchart. An algorithm is said to be efficient and fast if it takes less time to execute and consumes less memory space.

Moving further we get acquainted towards the sorting techniques using various methods such as Bubble sort, Selection sort, Insertion sort, Quick sort, Merge sort, Heapsort and searching techniques using Linear search and Binary search. These are nothing but something out of our daily searching sorting habitual techniques. Everything we study requires a practical day to day approach but these techniques are what we acquired from the routines.

In simple language, Data Structures are structures programmed to store ordered data in a very easy, to-the-point, short and precise manner for various operations. It represents the knowledge of data to be organized in memory. It should be designed and implemented in such a way that it reduces the complexity and increases the efficiency.