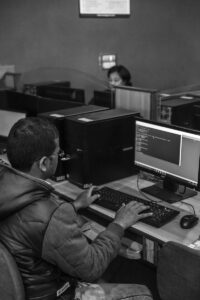 Computer technology is now serving as a connection between people in the techno world. These computers have made a network through Desktops, laptops and mobile devices to perform multiple operations at once but, this domain does not include only the machines. Various communities, organizations rely on this technology to innovate the majority of things in their day to day routine. These computers are working in various supports to various fields like gaming, web development, plug-in generations and many more.

In B. S. Anangpuria Institute of Technology &amp; Management at our department of Computer Science &amp; Engineering, we start our student with basic Essence of various types of media that are used in today’s world for design of the various documentation and web pages used widely over net.

The computers are now making it possible to combine sound, images, and motion together to work on various applications. The Multimedia Technology deals with some sections that are used for accessing different medium of data transferring and storage of data. They also work with the different editing tools and software’s for making the content on the web pages look good and user friendly for user interaction with the web pages.

The information available through online resources is both expanding rapidly and becoming increasingly accessible. Thus we need to work with the information accessing models. The initial part of the lab consists of the introduction of the students with the web page designing using the various HTML tags and plugin. The practical includes the designing and representation outlook of the web designing which is very important in today’s world.

The main working of the students will occur with a powerful tool named Macromedia Flash. Flash was originally created to make the web more colorful for creating GIF’s. The flash word has gained its importance for animation but it has far more applications.

The next part tries to involve students with the flash designing interactive elements that could be used on enhancement of the view created for the web pages. They involve tasks like moving the data, transformations and so on. That is now useful for creating different logo of different companies. They use techniques like motion twinning and shape twinning effects.

These on hand practices to the technique give the students of computer science a basic building block to the web designing domain.

The next part of the lab includes some higher techniques that help for the enhanced interactive functions on the website. They include the working with the colors now used for creating different shadow effects and many more coloring effects. This part also includes working with the gaming domain. The students make different games like snake game, ping pong ball game and many more using the above given knowledge in the flash.

The final part of the lab includes the students that could actually get the smaller animations that could help for the detailed animations used in various aspects of the multimedia designing. We try to make a moving man and walking man using techniques like Onion skinning.